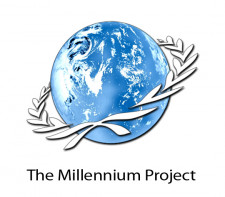 WASHINGTON, September 8, 2021 (Newswire.com) - In an open letter to UN Secretary-General António Guterres, internet pioneer Vint Cerf, Nobel Prize Laureate Oscar Arias, and other technological, business, political, technological, environmental, and academic leaders around the world are calling for a new UN Office of Strategic Threats to coordinate global research on long-range strategic or existential threats to humanity, and to their prevention.

The letter [attached] requests that the UN Secretariat conduct a feasibility study for the proposed UN Office. "The immediate crises always seem to overrule the long-term concerns about the future of humanity. So, we need a specific UN Office that just focuses on what could make us go extinct and how to prevent it," said Jerome Glenn, CEO of The Millennium Project."

The UN already has agencies that are addressing many of the serious trends today—such as decreasing fresh water per capita, concentration of wealth, and ethnic violence—but these do not pose a threat to the survival of our species.

However, there are long-term threats that do, such as the ten below:

"There is no single point for collaboration in the UN system that addresses such long-term threats to human survival," said Ambassador Héctor Casanueva, former Chilean Ambassador to UN multilateral organizations in Geneva. "A UN Office on Strategic and Existential Threats to humanity could identify, monitor, anticipate, and coordinate strategic research on a global scale to prevent these threats, he suggested. "It would serve international agencies, multilateral organizations, nation-states, and humanity in general."

The idea of a new UN Office was raised during the celebration of the annual "World Future Day" on March 1, 2021, a global online conference of nearly a thousand experts from 65 countries. The Millennium Project, which hosts World Future Day, suggested that a resolution be offered at the next UN General Assembly, to be held in September 2021. It would give the UN Secretariat the mandate to conduct a feasibility study of the proposed UN Office of Strategic Threats.